This Easter, I've been thinking and meditating on the Apostle Paul’s words … his heart’s desire that he wrote in Phil. 3:10
that I may know him (Christ) and the power of His resurrection, and
may share His sufferings, becoming like Him in his death, 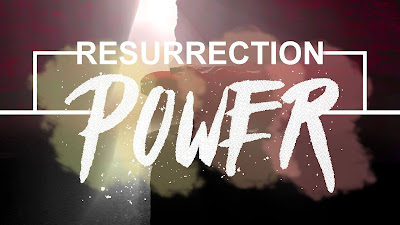 to Know Christ = to Experience All that is Christ
Have you ever read this verse … or heard a message on Phil. 3:10, and thought to yourself, “I want that!”  “I want to know Christ … I want to Experience Him in such a profoundly meaningful way … I so desperately want my relationship with Him to be so full that I’m willing to consider everything else in life to be worthless in comparison to Know Him and the power of His resurrection.”

to Know the Power = Explosive Miraculous Mighty Power of His Resurrection
On the surface, It may seem like Paul is just stating the obvious, or even thinking out loud about what it must have been like to witness Christ’s Resurrection.

He is not saying that he wants to be a spectator is some grand theatre watching the events of the resurrection unfold. No, he wants to be in the middle of it.  Present with Jesus to experience it first-hand.

Let's consider the events of this past October (2016) with the Chicago CUBS. It’s one thing to watch Game 7 of the World Series from home on your couch or even to be one of the few who could afford tickets to in the stands … But it’s something entirely more profound if you are one of the players on the field experiencing the exhilaration of the final out that secures your victory as a thunderous ovation erupts and roles over you in the moment.  In just a small way, that may give us a glimpse of Paul's expressed desire to experience everything that Christ has experience including the Power of His Resurrection.

In the narrative of Jesus' death and resurrection, Matthew writes about 2 cataclysmic earthquakes.  One at His death in Matt. 27:50-54 and a second at His resurrections in Matt. 28:1-10. At these 2 moments we see Resurrection Power as Life burst forth. At Christ's death, many dead saints were awoken and came to life and revealed themselves in the Holy City, at Jesus' resurrection, the Son of God burst forth to ultimate victory over sin and death.

But we also see that the Rocks of this earth moved and cried out.  Remember, just days earlier, Jesus was riding into Jerusalem on a donkey as the crowds gathered crying out in praise and adoration for the Messiah.  The Pharisees and members of the Sanhedrin instructed Jesus to stop the people, to which He replied,
“I tell you, if these were silent, the very stones would cry out.”Have you ever considered that these earthquakes could very well be the fulfillment of Jesus' words? At horror of Jesus' death and the still of the morning on the day He rose from the dead, the silence was broken by the rocks themselves in thunderous applause of explosive resurrection power.

Friends, let me encourage you to do a character study of the life of Peter, the one Jesus calls...
“... you are Peter, and on this rock I will build my church, and the gates of hell shall not prevail against it.”  Matt. 16:18.
Revisit some of the events of Peter’s life with Jesus

This is the Gospel ... the Good News ... that Jesus, God's Son, willingly suffered, died, was buried and rose again in ultimate victory over sin and death for you! You can know Jesus Christ and the power of His resurrection by allowing Him to explode your curse and slavery to sin and death in you while raising you to new life (eternal life) in Christ.

Easter Prayer
Lord, on this Day of Resurrection, open my eyes and heart that I may know Christ and the power of His resurrection, and may share His sufferings, becoming like Him in his death, Amen.